DocumentBurster is a powerful report distribution software which can split up reports like invoices, statements, purchase orders, commissions reports or dunning letters in order to distribute relevant parts to each of your clients, subscribers, partners or vendors.

DocumentBurster can process PDF and Microsoft Excel reports and will naturally complement and extend your current business intelligence solution.

DocumentBurster is a flexible, versatile software which works on Microsoft Windows or Linux operating systems.

DocumentBurster has great report bursting, merging and distributing capabilities. This should be enough when you just start with document delivery and you have a relatively small number of reports to burst and distribute monthly. However, if you have more serious report distribution scenarios, if you are looking for a complete automated process, if you need advanced scheduling capabilities, if you have a big number of huge reports to be distributed to hundreds or even thousands of customers - in such cases you will be interested in DocumentBurster Server.

DocumentBurster Server can be deployed as a central report distribution server. This is useful if you are looking for a single common place for distributing your reports, accessible to multiple employees and/or legacy applications from within your organization.

Your customers might need their reports to be sent through various distribution channels. Most of them will prefer email but others will rather use FTP. Some customers might have their own automated software systems to further process the reports and which might expect the input to be placed in a specified remote location. Others might have more strict security related requirements and will prefer the FTPS protocol. In some scenarios the generated reports should be published for the customers through an enterprise web portal like Microsoft SharePoint. In order to support these scenarios, DocumentBurster offers a broad range of distribution channels like email, local files, web portals, FTP, FTPs, SFTP and TFTP, Windows shared (network) paths, UNIX Samba servers and WebDAV servers.

In case you have a specific requirement, not covered by the above distribution methods, then DocumentBurster’s plug-in architecture allows smooth integration of custom distribution channels into the report distribution process.

DocumentBurster has the ability to burst and publish reports to enterprise web portals so that your clients will be able to access the reports published for them on the Internet. Think about the situation when you have hundreds or thousands of customers or dealers and, with a single click, you can make the relevant individual reports available to each one of them on the web portal. DocumentBurster can deliver reports to Microsoft SharePoint, IBM WebSphere Portal, Oracle Portal, SAP NetWeaver, Tibco PortalBuilder, Samsung ACUBE Portal and to all of the major open source portal applications like Liferay Portal, Hippo portal, JBoss Enterprise Portal, eXo and Apache Portal.

Scheduling is a common requirement in business applications. DocumentBurster Server has advanced scheduling capabilities which can be configured as per your own needs. It is easy to schedule reports to be processed and distributed at a specific date and time, to distribute them hourly, daily, weekly, monthly or set up your own frequencies, every other day, third Monday of the month and so on.

When handling important financial reports, securing the distributed documents with a password might be an interesting feature for you. With a document open password (also known as a user password), users must type in the password you specify to open the PDF.

DocumentBurster can encrypt the business reports with an user (and/or owner) passwords using 128 or 40 bits encryption strength.

For branding purposes, DocumentBurster has support to stamp the business reports using your company logo, official signatures or any other stamp or logo you might need.

DocumentBurster can really integrate and bring report bursting and report distribution capabilities to any existing business software. Just go through the DocumentBurster Report Distribution Case Studies to get an idea of how people are currently using the software with a various range of existing invoicing, accounting, payroll or big CRM and ERP kind of applications.

DocumentBurster Case Studies are the best way to learn how DocumentBurster report bursting and report distribution software can help your organization. 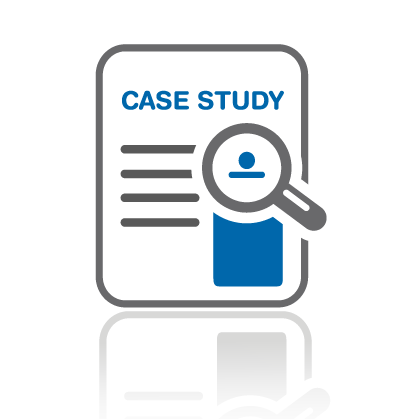