There will be situations when it will be required to attach multiple reports to the emails which are being sent by DocumentBurster.

The requirement is to send electronic invoices via email. The invoice is formed by a PDF which is the graphical form of the invoice, and an XML file which contains the details of the invoice.

By some countries law, it is required to send both files in order to consider this as a valid invoice.

The above requirement can be achieved by defining both files as attachments for the output emails:

With this configuration DocumentBurster will attach two (2) files to all the emails which are being sent when a report is being processed. Furthermore, multiple files can be archived and sent together as a single zip file.

Following is the configuration to attach multiple reports. In the menu go to Actions -> Config… -> Attachments 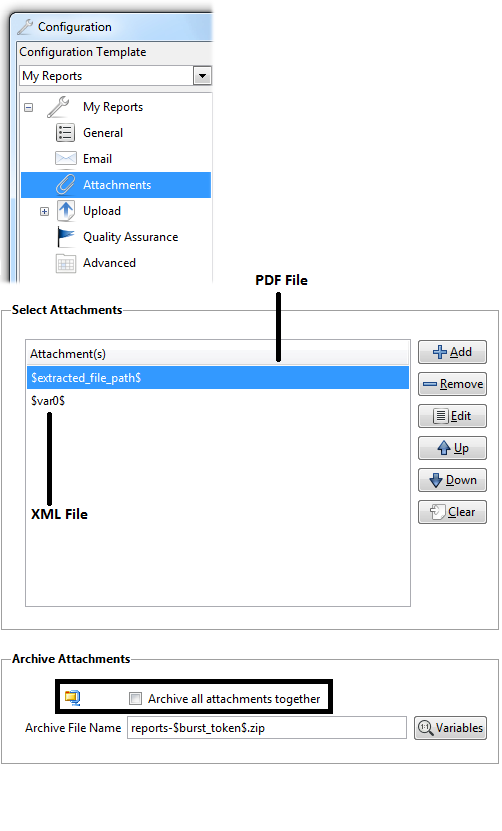 In the above screenshot $extracted_file_path$ is the corresponding PDF file extracted by DocumentBurster and $var0$ user variable will be mapped to point to the path location of the associated XML file. Using this configuration DocumentBurster will attach two (2) files to each of the emails which are being sent (unless the Archive all attachments together check-box is selected).

Note: As expected, by removing all the attachments from this configuration screen DocumentBurster will send emails without any attachment. This might also be useful in some specific situations.

Feel free to download DocumentBurster and see for yourself how this software can help your company to implement the most demanding report distribution requirements.